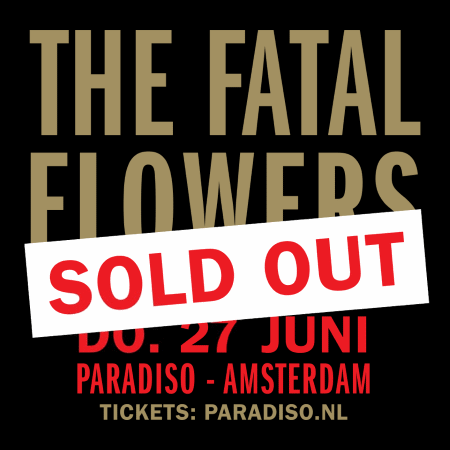 What a great evening this was. Some thirty years after I last saw them, news broke that The Fatal Flowers, the very best rock band to have come from The Neteherlands ever, was reuniting!

They would come to Alkmaar as well. Tickets for Paradiso were bought as well. It was meant to be the last evening of the tour. And so the waiting commenced.

In a scorching hot Paradiso The Fatal Flowers played their perfect set. From Well Baby (my favorite song by the band) onwards it was magical even. It all gelled, the band was hungry, thankful, incredibly good and moving. The smile on Richard Janssen’s face was a sight to behold.

Were there any changes when compared to the Alkmaar show 12 days earlier? Yes, three.

During the first encore original bass player Marco Braam entered the stage, playing his song We Thought They Loved You. 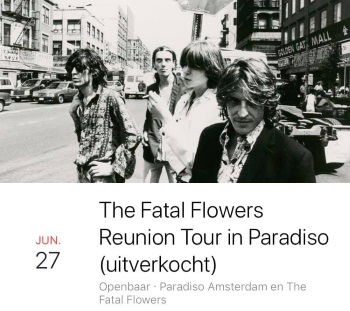 The end of the second encore was heart warming. One by one The Fatal Flowers left the stage and handed over their instruments to (their?) children, who played the song. A beautiful and moving symbolic gesture.

The third encore was beautiful. Pete Seeger’s Where Have All The Flowers Gone closed the evening just perfectly. A protest song marked the end of my renewed encounter with the best band The Neterlands has ever had.

The sheer number of classics that had been played was so huge, that the loss of this band is felt even more. Great, great band!

So, why not 5 stars then? The sound wasn’t anything to write home about. A shame.

N.B.: I did create a special 4¾ picture for The Fatal Flowers. 😉

Encore:
Round and Round / Billy / We Thought They Loved You / For Christ’s Sake

Encore 3:
Where Have All The Flowers Gone