Van Halen – The best debut album of all time?

Nick Cave & The Bad Seeds – Push The Sky Away

Since Push The Sky Away is the first Nick Cave & The Bad Seeds album on which Mick Harvey is not featured (anymore), a look back to January 23rd, 2009. On that day Mick Harvey announced the end of the 36 (!) year long collaboration between him and Nick Cave:

I’m confident Nick will continue to be a creative force and that this is the right time to pass on my artistic and managerial role to what has become a tremendous group of people who can support him in his endeavours, both musically and organisationally.

One year later it was revealed that Harvey’s relationship to Cave had deteriorated due to different views about the musical direction of the band. Also, Harvey wanted to spend more time with his family.

Opposite of Harvey’s leaving is the (temporary) come-back of Barry Adamson, who is part of the band again for the first time since 1986’s Your Funeral… My Trial. 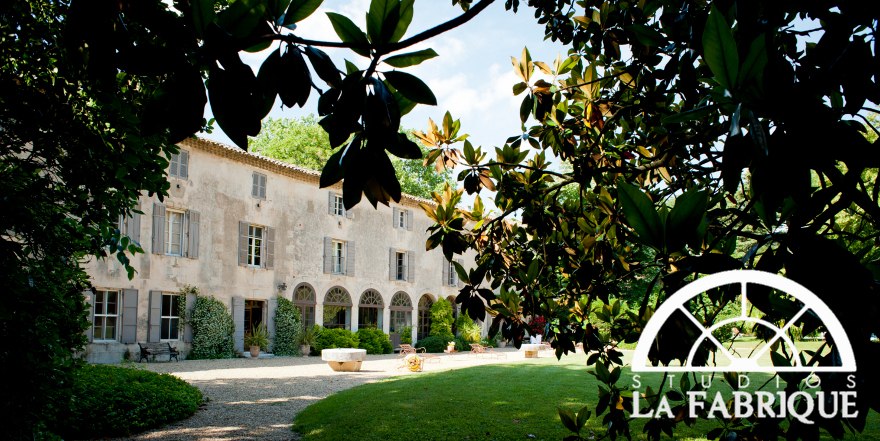 Recordings for the album took place at La Fabrique, a recording studio which is housed in a 19th century castle at Saint-Rémy-de-Provence, France. A beautiful environment for the recording of an album. At the time the band entered the studio, Cave had some free form ideas, but nothing that was finished. According to Cave the band changed them into “things of wonder”.

The recording process, and work beforehand, were filmed for the documentary 20,000 Days On Earth, which was released on September 7th, 2014.

Push the Sky Away 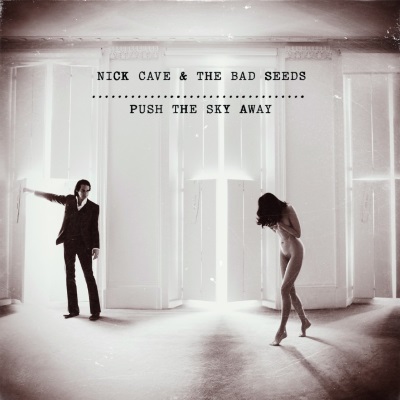 Nick Cave & The Bad Seeds – Push The Sky Away

Push The Sky Away is a beautiful album, with a number of drone like songs. According to Cave the sound is heavily influenced by Warren Ellis, who, after Mick Harvey’s leaving, became Nick Cave’s new right hand man. A lot of the songs were inspired by “Googling curiosities, being entranced by exotic English Wikipedia entries ‘whether they’re true or not'”.

The album sounds tender, minimalistic and different from previous albums, almost meditative. And yet, it still sound very much like a Nick Cave & The Bad Seeds album. A hidden tension and mystery runs through the entire album. Even when the expected/built-up explosion doesn’t happen, it still is quite a spectacle listening to this album.

The opening song We No Who U R (released as a single) is indicative of what is about to come next. Open, sinister, transparent and dark all at once. It is noteworthy that Cave chose this song to start his concerts for the album’s accompanying tour.

The album closes with the moving Push The Sky Away. In the mean time some great songs have passed on by.

Two of them will forever be Cave classics: the majestic Jubilee Street and the impressive Higgs Boson Blues. It doesn’t happen too often that an artist, who is more than 30 years into his career, still composes songs that add to his own body of work. These two songs prove, once again, that Cave is still at the height of his powers, as a performer, as well as a composer.

Contrary to the majority of his immediate peers, Cave shows he still matters and he is still capable of creating relevant music that has a place in the here and now. Quite a feat.

The cover shows Cave opening a window (shutters) which shines a light on his naked wife, Susie Bick. The photograph was taken at their home in the Brighton, England.

All lyrics written by Nick Cave. All music composed by Nick Cave and Warren Ellis, unless stated otherwise. 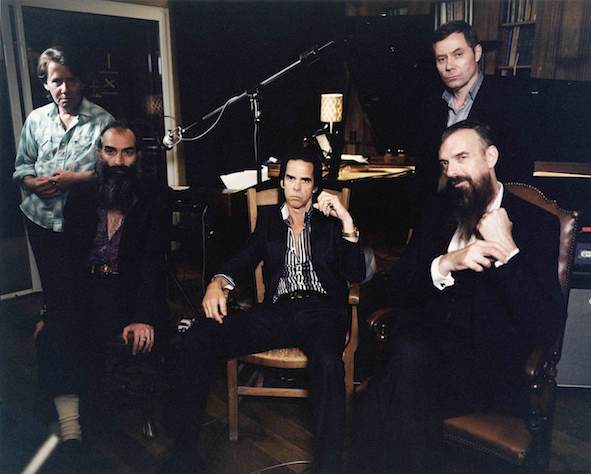 Nick Cave & The Bad Seeds on Push The Sky Away

Since I liked the album so much, I decided it was time to, once again, see Nick Cave live. I had seen him before at the Vredenburg theater in Utrecht (Netherlands) (Dutch only) some 25 years earlier and was not impressed.

Luckily, Nick Cave & The Bad Seeds went on tour. Unfortunately without drummer Thomas Wydler, who had health issues. Cave seemed genuinely saddened: “It’s very sad that he can’t do the tour because of health reasons. That is a hard blow for us. He is the sound of this album.”.

Nick Cave played at the Heineken Music Hall, Amsterdam on November 4th, 2013 (Dutch only). From the very first note, it was immediately clear that this was going to be a ridiculously good show. And it was. The sound was really loud (great!) and the first notes of We No Who U R attacked my diaphragm. Cave sang beautifully and passionate. Goosebumps. Just one song in and I was hooked. The second song: Jubilee Street, the song with the superb build-up, ending ever faster and faster. On the album it is great, live unforgettable. The Bad Seeds nearly exploded. After two songs it was clear that this was the best concert of the year 2013, maybe even ever. This was so otherworldly good! I remember standing there, watching and listening open-mouthed. Half way through I noticed I was not the only one. During the beautiful ‘small’ songs, like God Is In The House the audience was completely silent. The concert ended with a new song: Give Us A Kiss.

After the show I really lived on a high for a couple of days. Another show was scheduled in Amsterdam, but that was sold out. I tried the official channels, and I was, miraculously, able to get two tickets (after I had payed for them, no more tickets were available). On November 17th, 2013 (Dutch only) I was at the Heineken Music Hall, Amsterdam, again. And again I was completely blown away. What a performer! 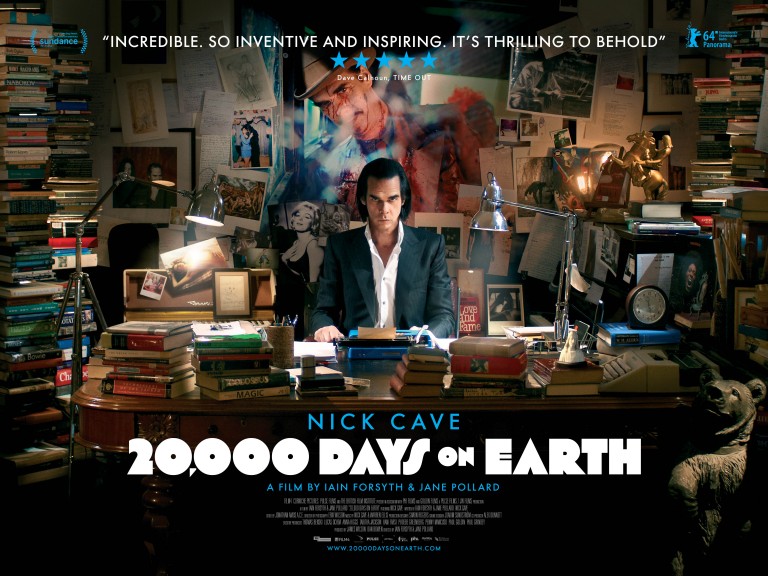 After Push The Sky Away

That same year, on November 29th, 2013, the sixteenth album by Nick Cave & The Bad Seeds was released: Live From KCRW. The album contained specially recorded live tracks from the band’s critically acclaimed new album ‘Push The Sky Away’ alongside classic Bad Seeds material. Almost all performances were acoustic. It turned out to be the preface to the Nick Cave solo tour of 2015, where he played smaller theaters with a stripped down version of The Bad Seeds. Luckily, The Netherlands were part of the tour.

As stated above, a documentary was being shot before and during the recording of the Push The Sky Away album. The result was the (beautiful) documentary/movie 20,000 Days On Earth, called after the number of days Nick Cave had spent on this earth.

Probably a known fact, but Nick Cave’s son Arthur tragically died on July 17th, 2015, at their home town of Brighton. The consequences of that tragedy can be witnessed in the moving documentary/movie One More Time With Feeling and the impressive album Skeleton Tree, both released in 2016. That was also followed by a tour, that also made a stop in Holland (and Belgium) in 2017. The shows were bigger than before (concerts took place in arenas), but also more intimate. Only Nick Cave can make those contradictory circumstances seem completely natural.

What’s your opinion on Push The Sky Away? And the following tour? Also that good? Let me know!