Prince at the Rock & Roll Hall Of Fame: the guitar solo

Put Your Slouch Socks On: TV One’s Docuseries Unsung Celebrates the Music and the Legacy of 1980s Family Group The Jets

Following part 1 of his Fifty States Project Sufjan Stevens released Seven Swans in 2004. A predominantly acoustic album filled with Christian themes. After Michigan a year earlier, the second album in a row by this genius that went by unnoticed.

Because Sufjan Stevens will resurface many more times as the subject in one of my articles, a very short introduction. He was born in Detroit, Michigan and was raised by his father Rasjid and his stepmother Pat. On a few occasions he visited his mother, Carrie, who had remarried to Lowell Brams. Brams in particular, was an important figure to Sufjan, with whom he, to this day, still has very warm relations (Brams heads Sufjan’s record company and label Asthmatic Kitty).

The name Sufjan was given by the founder of Subud, an interfaith community his parents belonged to when he was born. Sufjan was introduced to religion at a very young age, and the Christian variety in particular. To this day he remains a devout Christian.

Sufjan is a multi-instrumentalist and is capable of playing along with himself during recording sessions, enabling him to translate his music to tape all by himself.

Sufjan started his musical career as a member of the groups Marzuki and Con Los Dudes. Eventually, Sufjan went on as a solo act and released his first album A Sun Came in 2001, followed by Enjoy Your Rabbit one year later.

In 2003 Sufjan announced his Fifty States Project, a project that was to result in 50 albums, each one dedicated to one of the 50 states in the US (later Sufjan admitted the announcement was a promotional tool). The first episode Michigan, a phenomenal album, that put Sufjan on the map. The next album was not part of the project, but more like e compilation of songs originally intended for another project: Seven Swans. 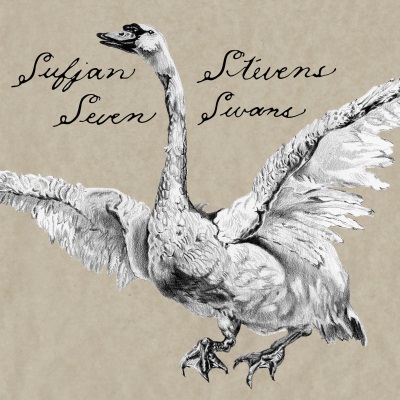 Until the release of Seven Swans Sufjan had never given up his regular job (he worked at the children’s section of the book department at Time Warner). That changed.

A lot of the songs are about Bible stories or refer to events in that book. Thankfully, Sufjan never crosses the line to annoying preaching or the urge to converse. He sticks to his personal experiences and thoughts and doesn’t judge.

As so many of his albums, Sevens Swans contains beautiful songs with great lyrics too. Time and time again, Sufjan is able to write moving melodies and is able to, however minimal, make them rich and full.

Seven Swans is the last album on which Sufjan Stevens translates his faith into lyrics so openly and the last album in a long while to sound so minimalistic. All following albums are more lushly orchestrated and entail more everyday subjects.

By the way, Seven Swans proves that faith and religion don’t necessarily lead to musical limitations. Just like Prince’s Lovesexy, Seven Swans is influenced in the right way and offers the right amount of passion and persuasive power to intrigue for the entire runtime of the album.

All songs written by Sufjan Stevens.

Enclosed with the vinyl release was a bonus single, which contained two extra songs:

Sufjan Stevens – The Dress Looks Nice On You (single)

On March 8th, 2004, the only single of the album was released: The Dress Looks Nice On You. The B-side contained the song Borderline, which wasn’t part of the album.

Following the release of Seven Swans Sufjan Stevens would astonish the world in 2005 with the masterpiece Illinois, part 2 of the Fifty States Project. An unrivaled beautiful, moving and ingenious album, that made his name once and for all. An album that is played a lot in my home, and it’s my 10-year old son Timur’s (who also an author on this blog) favorite album.

Several releases followed, the one more beautiful than the other:

On top of that, Sufjan regularly plays along on albums and songs by others and releases music in cooperation with others, like 2009’s The BQE and 2017’s Planetarium.

Do you know this Sufjan Stevens album? What do you think? Let me know!