The first few years I spent my holiday in Turkey, the fuar (a kind of fair) still existed. Public entertainment for the public, which featured playing music (Turks love music!) and at times concerts were staged. With the rise of the AK party the music was more and more marginalized and nowadays the fuars don’t even exist anymore, all the entertainment has vanished.

On the 16th of June this year Radiohead fans in Istanbul were attacked, because of the fact they were listening to the recently released A Moon Shaped Pool. This took place indoors, after closing time. The fact that people were listening to music and using alcohol during the month of Ramadan, was enough to enrage some people to the level of attacking the store with lead pipes. Again, all this took place inside a shop with doors closed. The protest against the violence the next day, was immediately suppressed by the riot police.

Nowadays, after the despicable attempted coup, the Turkish regime seems to be engaged in a, equally despicable, counter-coup. Given the absurd amount of arrests, further diminishing free media (as if that still existed) and polarizing, many comments/people warn for a lapse into dictatorship and refer to the many similarities between nazi-Germany and, remarkably much, Iran. In the last instance the majority of the people also preferred the democratic process, which enabled the rise of the ayatollahs. Enthusiastically and blindly positive the way was paved for institutionalizing a dictatorship, with the term democracy as the legislative approval.

In the United States Frank Zappa followed the events. Zappa, brilliant musician, (society) critic, provocateur and composer did what he always did: compose and make music. As a result of the Iranian revolution Zappa released Joe’s Garage, Act I in September 1979, to be followed by Joe’s Garage, Acts II & III in November of the same year, albums 28 and 29 in his ridiculously rich oeuvre.

Besides being a brilliant musician and composer, Frank Zappa was often politically and socially critical in his lyrics, most of them with an ironic undercurrent. Zappa opposed to war, (fundamentalist) belief systems and narrow-mindedness, but popular culture and media were also scrutinized.

Music as a forbidden artform

In the liner notes to Joe’s Garage, Act I the following text is entered:

Desperate nerds in high offices all over the world have been known to enact the most disgusting pieces of legislation in order to win votes (or, in places where they don’t get to vote, to control unwanted forms of mass behavior).

JOE’S GARAGE is a stupid story about how the government is going to try to do away with music (a prime cause of unwanted mass behavior! It’s sort of like a really cheap kind of high school play … the way it might have been done 20 years ago, with all the sets made out of cardboard boxes and poster paint. It’s also like those lectures that local narks used to give (where they show you a display of all the different ways you can get wasted, with the pills leading to the weed leading to the needle, etc., etc.). If the plot of the story seems just a little bit preposterous, and if the idea of The Central Scrutinizer enforcing laws that haven’t been passed yet makes you giggle, just be glad you don’t live in one of the cheerful little countries where, at this very moment, music is either severely restricted … or, as it is in Iran, totally illegal.

All in all a perfect opportunity to shed some light on Joe’s Garage Acts I, II & III. Originally intended as a single, after the release of (also released in 1979) double-album Sheik Yerbouti (including the modest hit Dancin’ Fool), the songs Joe’s Garage and Catholic Girls were recorded by Zappa and band. It soon became clear Zappa had so much material that the idea of just a single was dismissed. It was to become a triple-album instead, as a result of the revolution in Iran en the full ban on (pop)music. Hoe did Zappa do that? 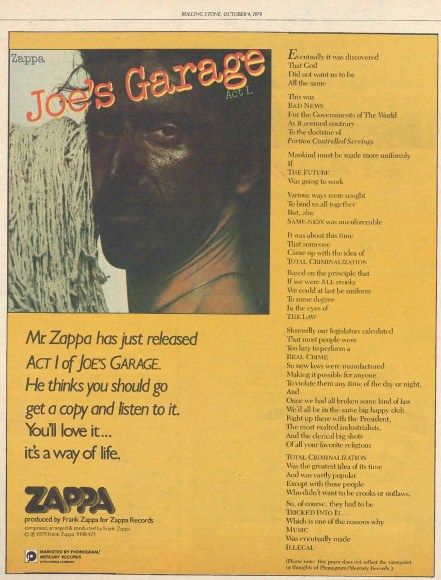 As was the case before, Zappa accomplished this by creating a pretty cynical story. The story is told by the Central Scrutinizer, a government-employee. The Central Scrutinizer tells the story of Joe, an average young man, who falls prey to the seductions of music and everything that comes with it: drugs, disease, strange sexual practices and prison. In the end it even leads to insanity.

The first few songs introduce the key players in the story: next to the Central Scrutinizer, Joe en Mary (Joe’s girlfriend). After side A (running to F) the dangers (and consequences) of the music are becoming clear: Joe is confronted with incomprehension (turn that noise down!) and aggression, Mary turned into a groupie (from Catholic Girls via Crew Slut to Wet T-Shirt Nite) and ran off with a major band. During the course of the story Joe contracts a sexually transmitted disease (Why Does It Hurt When I Pee?) of a girl named Lucille (Lucille Has Messed My Mind Up).

At the end of Act I the Central Scrutinizer (satanically) concludes that ‘girls, music, disease, heartbreak … all go together’. In the meantime Scientology is copped through A Token Of My Extreme: how a calculating religion can effortlessly co-exist with an evil totalitarian regime or government.

In Acts II & III poor Joe gets worse and worse. Humiliation after humiliation, prison sentence and the realization that even cyborgs loathe him, make him, just in time, see that the greater the distance between himself and music is, the more his life can be restored.

The music has many sudden twists and extremely complex musical structures and polythythms. After one of the best drummers in the world, Terry Bozzio, left Zappa’s band, Zappa somehow managed to get another insanely good drummer, Vinnie Colaiuta.

The cover to Act I as well as the cover to Acts II & III contain a picture of Zappa in so-called blackface make-up, in the US stamped as racist. In Holland the national holiday of Sinterklaas involves Zwarte Piet. Zwarte Piet basically is blackface all over again. The past few years arguments are building up around the subject, but in true Dutch fashion, nothing is decided yet. So it’s not just the subject of the album itself, but the cover as well, that still is a current subject!

Joe’s Garage is not the best work Frank Zappa has done. Personally I rate In New York (with Terry Bozzio) as my favorite, but it very well may be his most (overtly) political one. I personally think the story is really funny and with common decency, but many thought (and probably still think) ) differently. Lyrics like with a tongue like a cow, she could make you go wow (of Catholic Girls) tend to not go down so easily with everyone. At the time of release, a lot of critics were bothered by this. During the course of the ensuing years admiration for the nerve and musicality of Zappa became the common denominator when reviewing his (and this) work. And rightly so.

The story, of course, is completely ‘over the top’, but the primary message Zappa wants to convey (sadly) is more current than ever.
Exaggerated? Justified? Other examples, like the mass disco record burning during Disco Demolition Night on July 12th, 1979 in Chicago?