Slowly, but surely, the music becomes louder and louder. The laid-back fantastisc riddim of The Wailers fills the room…

The album Exodus is underway. A great Bob Marley & The Wailers album, which turns 40 years old today. Often characterized as the best album by Bob Marley. Despite the fact my favorite Bob Marley album is Babylon By Bus (see Album top 50, numbers 25 to 11, number 17), I can’t ignore Exodus, because of its extreme beauty.

In 1974 the The Wailers disbanded and Bob Marley, Peter Tosh and Bunny Wailer each went their separate way. Tosh and Wailer both started a solocareer and Marley formed Bob Marley & The Wailers, maintaining the excellent rhythm section. The band was expanded with keyboards, percussion and the “I Threes” (the female background singers, including Rita Marley, Bob’s wife).

Pretty quickly Bob Marley & The Wailers grew more poular, especially after the release of the iconic album Live! from 1975 and its lead-single No Woman, No Cry. In 1976 this was followed by the Rastaman Vibration album, which became a big hit in the United States. 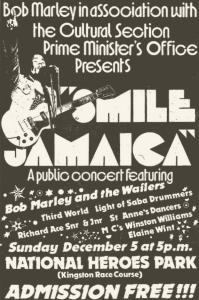 Marley’s connection to Jamaica remained intact. In 1976 general elections were held in Jamaica, which generated a lot of violence. To minimize the political distance, boost the Jamaicans’ morale and promote the sense of solidarity and peace, Marley agreed to stage a free concert. The event was titled Smile Jamaica and was to take place on December 5th 1976. During rehearsals for the show, an assassation attempt on Marley’s life took place. On December 3rd 1976 a bullet graces Marley’s chest and lands in his upper-arm (the bullet was never removed because of the real danger that Marley would be unable to move his fingers after the bullet’s removal). Rita Marley received a (harmless) bullet in her head and manager suffered multiple shot-wounds and was in bad state. It’s a miracle no-one else got shot, or killed. The attack was never solved and/or claimed, so the motives remain uncertain.

Despite the threat, both Bob and Rita appear on the Kingston stage two days later, with their wounds and bandages clearly visible. After the show Bob Marley leaves his beloved Jamaica and leaves for London, England. He wouldn’t set foot on Jamaican soil for 18 months.

Exodus is the ninth studio album by The Wailers/Bob Marley & The Wailers and is released on June 3rd 1977 on Island Records.

The album mixes blues, soul, rock and funk elements with the laid-back reggae. The lyrics contain other subject than previous albums and are about more down-to-earth things like change, religious politics and love and sex.

Exodus was a great success, both artistically and commercially. Bob Marley became an international star. Of all Bob Marley albums, Exodus has the most numbers included on compilation-album Legend, the best-selling reggae album of all time. 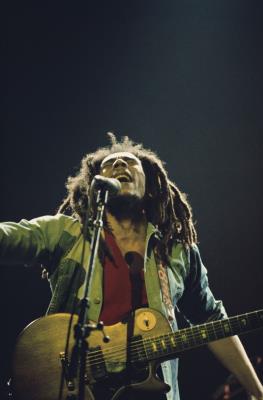 The album is primarily recorded in London, on which Marley lays low, reflecting on the current situation. Despite that, the album is still urgent. Partly because of allowing more external (musical) influences, the album is different from its predecessors: richer.

And yet Exodus is everything you may and can expect from a Bob Marley album: statements, poetic lyrics, consolation and beautiful lush music. Beautiful arrangements and a very clear production. The album is so perfect that Time Magazine declared Exodus album of the millennium in 1999.

As stated the album starts off phenomenally with Natural Mystic. Songs So Much Things To Say, Guiltiness and The Heathen are about oppression and rising up against injustice. The title song is an unbelievably funky anthem-like song about the movement of Jah people. The (political) campaign slogan by Jamaica’s prime-minister, “We know where we’re going”, is part of the song. The song tells the tale of the promised land and leaving Babylon (the system that is built upon slavery / the global free markets/globalisation):

The LP’s B-side opens with Jamming, a glorious uptempo song. Waiting In Vain is a beautiful love song, containing a great atmosphere and rhythm. Love song Turn Your Lights Down Low is followed by the optimistic and happy Three Little Birds: 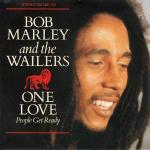 The closer One Love / People Get Ready had already been recorded in 1965 by The Wailers and was re-recorded for inclusion on Exodus. Because the song is a partial interpretation of The Impressions’ People Get Ready, Curtis Mayfield is credited as co-writer on the international releases of the song, to prevent eventual copyright problems. In Jamaica laws for copyrights didn’t exist at the time, so Curtis Mayfield wasn’t credited on previous releases. The song was released as a single for the first time on April 9th 1984, as part of the release campaign for compilation-album Legend. The song turned out to be one of the greatest hits for Bob Marley. The video accompanying the song features a very young Naomi Campbell. 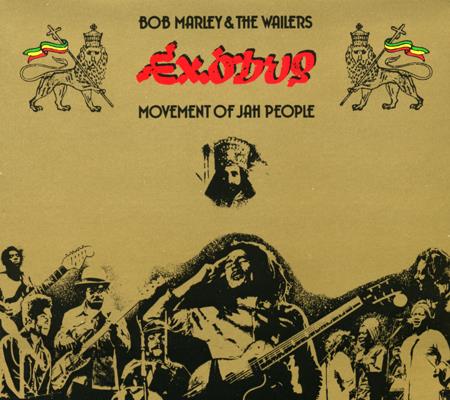 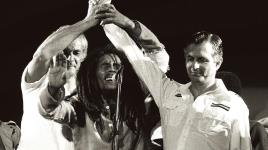 On April 22nd 1978 the festival One Love Peace Concert took place on Jamaica. After a period of 18 months Bob Marley was back on Jamaican soil. During the closing concert by Bob Marley & The Wailers, Marley makes the big political adversaries Michael Manley and Edward Seaga hold hands: an, especially for Jamaica, unforgettable and historic event. The United Nations award Bob Marley with the Third World Peace Medal because of that event. 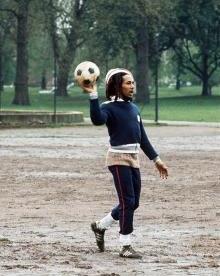 During his stay in England Marley injured one of his toes while playing soccer, one of Marley’s favorite pastimes. The injury was small, but didn’t heal. After examination cancerous cells were discovered. He refused the recommended amputation of his toe on religious grounds.

The cancer turned out to be highly aggressive and remained untreated until it was too late. Because Marley mistrusted traditional treatment he went to Germany to receive a holistic treatment. But it was too little, (way) too late. He lost his beloved dreadlocks. His last wish was to fly from Miami to die in Jamaica, but it wasn’t meant to be. He died on May 11th 1981.

Are you looking for a rich, varied and beautiful Bob Marley album, containing fine compositions, then Exodus is the go-to album!

What do you think of Exodus? Do you like it just as much, or do you love the superb earlier works, like Catch A Fire and Burnin’?